After slumping sales for several years, PC sales appear to be stabilizing. In 2014, the down side was limited to about 2 percent from a 10 percent slide experienced previously. 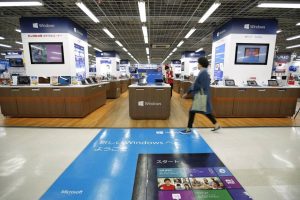 The top five PC makers, Lenovo, Hewlett-Packard, Dell, Acer, and Apple are still accounting for more than 65 percent of all PCs sold worldwide. Surprisingly, Apple gained percentage wise beating others. Apple seen a 16 percent increase in its sales in 2014 even though it is the world’s No. 5 PC producer. China based Lenovo, the world’s No. 1 PC producer seen its sales increased by about 10 percent in 2014. Lenovo is the leader claiming more than 19 percent of the worldwide PC sales market share.

The Framingham, Massachusetts market researcher IDC sees that PC shipments in 2015 to experience a further drop by about 4.9 percent from the last year’s level. Microsoft’s scaling back its subsidies, ever increasing use of smartphones and other mobile devices for various computing functions and the strong dollar are seen as reasons for the further sales reductions moving forward. This is why Intel is cutting its first quarter sales forecast. However, the researcher sees slowing of mobile devices sales too in emerging markets due to the competition from smartphones.